Home > Fashion > Counterfeit Outdoor Jackets - is it Fake or Authentic? 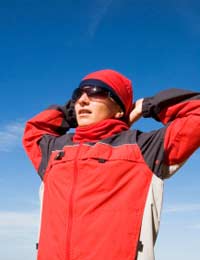 Since outdoor jackets, such as those used for hiking, have become more like fashion clothing, there have been growing numbers of fakes of the big names, such as North Face. There's money to be made from counterfeits, and the fakes tend to be cheap compared to the very high price tag - often well over £100 - of authentic merchandise.

If people can buy something that seems real for £20-30 instead of paying that high price, obviously there's going to be a demand. But it's very rare that the real thing will be sold that cheaply, and never if new, unless it's on some remarkable sale at an outdoor clothing store.

There's no doubt that the jackets - at least real, well-made outdoor jackets - can be very useful during the winter, keeping out the cold and the rain most effectively. They often employ advanced fabrics and technology to ensure the wearer is never clammy inside the jacket, and that the seams never leak. But even things like the utilitarian Barbour jacket, so beloved of the farming and horse crowd, are faked regularly. The fakes, though, don't do the job properly; many aren't even waterproof

Where To Find Fake Outdoor Jackets

Many of the fake outdoor jackets, where brand names are counterfeited, are often sold online, usually at online auction sites. But you can also find them at market stalls, although many of those will have no brand name, or names that mean nothing. Where a style is distinctive, as with the Barbour wax jacket, the appearance is copied completely - but there are no tags and names involved; the design itself is the copy.

How To Spot A Fake Outdoor Jacket

The first giveaway is the price. Why would anyone need to sell a new, good jacket for a price as low as £20? Why would somewhere like a market stall have a stock of them in different sizes - even at wholesales prices, that's a lot of money tied up in inventory if they're real.

Where there are logos, compare them to the real thing. In many cases they'll be close, but not exact, which means the jackets are counterfeit. Then examine the seams. Chances are they won't be as well-made or tight as the authentic item.

Depending on the brand, there will be other things that the counterfeiters don't do properly. A visual inspection can identify the differences.

All too often the sizing and font of the North Face logo on the front on the jacket is wrong. To a casual eye it looks good, but when compared to a real North Face hiking jacket, the differences become obvious.

Inside, the real thing will have a white size and care tag. On the fakes the size tag will be black, and there will be no care instructions (considering that the care of expensive jackets is paramount to keep them waterproof, that's an important oversight). The feel and texture of the material will also be different - the fakes use something that's much, much cheaper and won't give the wear of the real thing.

Although fakes, as well as the real items, use YKK zips, the fakes will have the zip pull on the left side. With proper North Face jackets it will be on the right. That might seem minor, but it's another clue to spot that fake.

Fake Designer Underwear
Share Your Story, Join the Discussion or Seek Advice..
The new popularity of the Barbour quilted jackets has brought this back into the spotlight, as there are countless copies around, although most lack the Barbour logo on the chest. Remember that often you’re paying mostly for the name, so something similar but logo-free might be just as good and fashionable, lacking only the label.
wendy - 24-Sep-12 @ 11:12 AM
Really, you have to ask yourself, if it looks to good to be true, then it probably is too good to be true. No one's going to sell Barbour or North Face new for twenty pounds, now are they? The trick they use is to make you believe you're getting a bargain, but real bargains are very rare. The buyer honestly does always have to beware, caveat emptor they called it in Roman times and its still applies!
Jen - 31-May-12 @ 2:45 PM
Title:
(never shown)
Firstname:
(never shown)
Surname:
(never shown)
Email:
(never shown)
Nickname:
(shown)
Comment:
Validate: