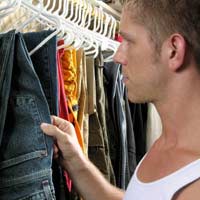 The makers of jeans, especially designer jeans, rake in the money. But, given that a pair of jeans can cost up to £200 for the hottest brands, that's hardly surprising. Nor is it too astonishing that they've become a target for counterfeiters. You'll find fakes of well-established brands like Levi's and Wrangler too, but the big market is in the fashion design end of the market, especially brands like Diesel, Seven and True Religion.

To spot a fake, you really need to know the original. It's the only way to have a basis for comparison, especially as designers make different ranges. Inspect pairs of jeans in the shops (and be thorough) or look on the designers' websites. Become familiar with everything that makes the jeans special, the quirks of design, bleach, stitching, and so on. The more you know, the better equipped you'll be.

There are, as ever, some good general guidelines that help spot the fakes. Invariably the material will be cheap, the stitching poor - very loose and uneven - and the price will be too low to be true. A combination of those three is a sure sign that the item is a fake. You'll often find them for sale on online auction sites, or at the stalls of market traders, or even possibly at car boot sales. They might seem like a bargain, but they're not - they'll fall apart quickly and won't wash well.

Fakers try to pay attention to the details on True Religion jeans, but often fail miserably, so by keeping your eyes open you'll be able to spot them. Look for the Buddha on the inner pocket lining. It should be bright red and small. If not, it's a fake. Similarly, the horseshoe logo on the back pocket should be properly centred. The tag inside should always read "made in USA" exactly and not some variant on that.

But the biggest problem the fakers have is with the pocket design. On real True Religion jeans the back pockets flaps, as well as the coin pocket in front, will be curved and go to a point in the middle. For some reason, the counterfeiters don't seem to be able to duplicate this.

Diesel is known for its thinner denim, which often has an almost elastic, stretchy quality. It's expensive, which is why the counterfeiters don't try to copy the fabric. But where you can really tell the real thing is on the tag inside.

There are two things on the tag that help identify real Diesel jeans, although you'll need to look very closely to make them out. Above the Indian head logo there are a series of very faint numbers.

Below it, under the line that reads "Made In Italy," there is some minute stitching. Inspect that closely. On real Diesels you'll see that the stitching spells out Diesel. That's far too complex for the knock offs. They'll have a line of silvery stitching there, but that's as close as they get.

Seven, or 7 For All Mankind, to give them the proper name, can be quite elaborate. Some have crystals attached. Where they're used they should be very firmly glued, and if there are extras, the Mylar paper holding them should have the maker's name (Seven usually uses Swavorski).

What you really need to check are the labels in the waistband. The small size label should be red, the stitching in gold. Numbers like 3 or 9 shouldn't be too rounded, although the fakes always are. They rarely get the care label right, either. Real ones should look faded, with the black printing soft. The label should not appear glossy. Behind that is the security tag, where the serial number of the item should appear punched into the fabric.