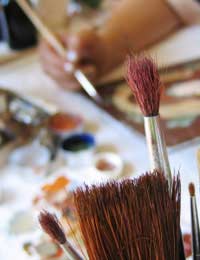 Crime goes on everywhere, even behind the most respectable and unlikely facades. But in a garden shed in a council house in Bromley Cross in Bolton, one of the greatest modern-day art counterfeiting operations of modern times took place. Over the course of 17 years Sean Greenhalgh, along with his parents, George and Olive (84 and 83 respectively, when they were caught), counterfeited about £10 million in artwork – an incredibly impressive figure for people who seemed so ordinary.

After their discovery they became known as the Bolton Forgers, partly for their origins, but also because they sold a counterfeit of an Egyptian statue, known as the Princess Armarna statuette which supposedly was made in 1350 B.C., for £440,000 – an embarrassing black eye for the experts there.

What Did They Do

Perhaps one of the reasons the Bolton Forgers were able to survive for 17 years without being caught was that they were careful. They didn’t try to counterfeit just old relics and items. Instead, they spread themselves wide.

Their counterfeits also included items by Northern artist LS Lowry; the French painter who went to the South Seas, Paul Gauguin, Henry Moore, and Barbara Hepworth. All of the artwork, both sculptures and paintings, was done by Sean Greenhalgh, who later admitted that he’d once created a fake Egyptian statue in just three weeks in the garden shed. How good was it? It fooled the experts at both the British Museum and also at the auction house Christie’s, whose Egyptology department valued it at half a million pounds.

Sean was an artist with obvious, wide-ranging talents, but his parents were also very much part of the scam. They came up with fake provenances and histories for the items and arranged the sales to museums and galleries. In one instance Olive Greenhalgh claimed that the fake Lowry had been a present from her father on her 21st birthday.

How Were They Caught

Things began to fall apart in 2005 when Sean Greenhalgh arrived for an appointment at the British Museum. George Greenhalgh had called up some time before to say he had some artefacts that his father had bought at a car boot sale long ago, and which had just lain in the garage ever since.

What Sean Greenhalgh brought to London appeared to be ancient Assyrian reliefs showing battles, and if authentic they would have been worth far more than £100,000. On an initial inspection Museum experts were so enthusiastic about the items Greenhalgh brought that they even considered purchasing them.

However, further investigation brought doubts, and the museum called in the police. In turn, they were informed that the Bolton family was under suspicion for art forgery. The Greenhalghs were arrested and stood trial in 2007. They admitted committing fraud over a period of 17 years, as well as a conspiracy to transfer and conceal £410, 392. The profits they’d made on the counterfeit works were estimated at £850,000, although they didn’t live in any kind of luxury.

When police searched the family home, they found half-finished paintings as well as completed watercolours which were just awaiting sale. Sean Greenhalgh was sentenced to four years and eight months in prison, but his mother just received a suspended sentence, while George Greenhalgh had his case adjourned to await medical reports.