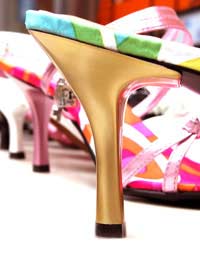 If anything becomes popular it’ll be faked, and that’s true even of footwear, especially women’s shoes and boots (you can also find fake designer sandals). The biggest market for them is online auctions, where you’re likely to see endless counterfeits, all too often masquerading as the real thing, but at a bargain price.

The problem, of course, is that although they say they’re the real thing, they’re just cheap imitations. When real Prada shoes or UGG boots can command high prices, why would there ever be a need to sell the genuine article at a steep discount?

But people fall for it on a very regular basis, some of them convinced they’re found a great bargain. Others probably don’t care, as long as the look is close enough. But the counterfeits don’t last the way the real thing does, meaning those accessories will wear out or fall apart very fast.

How To Spot Fake UGG Boots

The UGG boot design has become one of the most copied. From Australia, they’re quite distinctive and warm, with a furry lining (the real ones uses sheep’s wool, while the fakes don’t – their cheaper synthetic fur doesn’t have the same feel or colour). Since the fakes use so many man-made materials, they also tend to have a slight chemical smell that’s certainly not present in the real boots.

Inspect the soles of the boots. Real UGGs will have an R in a circle (the “registered” mark) next to the UGG, and that will tend to be missing on the fakes. Similarly, with authentic boots, the join between sole and heel will be flush, and the UGG label there will be embossed, not merely printed.

However, there are instances when you might come across boots that seem perfectly genuine in all other respects, but are being sold cheap. These are, essentially, seconds. If they have a label, and they should, it will be torn to indicate they’re not perfect. They should have the beige care card and insert.

How To Spot Fake Prada Shoes

With real Prada shoes, the insole should always be removable, and beneath the Prada logo on the insole it should read “Made in Italy.” All too often the fakes skip this step. They also imprint Prada on the sole of the shoe in the wrong font and size, which makes for an easy way to distinguish them.

Ultimately, though, the easiest way isn’t in the shoes themselves, but the packaging. If you look at the box real Prada come in, the logo isn’t on the lid at all; it’s a plain silver-grey. The log is only on the end of the box, along with all the information about the shoe and the bar code. Counterfeiters go for overkill and put the logo on top of the box lid. Real Pradas should also have a bag for the shoes made of silver plastic, which uses a silver drawstring. The fakes use cloth and a black drawstring, typically.

Identifying a Counterfeit Handbag
Share Your Story, Join the Discussion or Seek Advice..
A reputable shoe shop won’t sell fakes. They might sell shoes ‘inspired by’ the designer label, the same way High Street shops have clothes somewhat based on couture. But not with the fake labels on. Essentially, if you’re not seeing it in a shoe store of fashion shop, then it’s probably fake, and that should pretty much be the end of the story.
Mary - 26-Sep-12 @ 9:28 AM
Title:
(never shown)
Firstname:
(never shown)
Surname:
(never shown)
Email:
(never shown)
Nickname:
(shown)
Comment:
Validate: