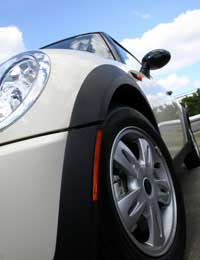 It's not uncommon to come across counterfeit auto parts, although they're thankfully rare in Britain. But who'd have thought there could be a good trade in fake auto accessories? There is, however, and it's one that's conducted globally.

Many people might shrug and not even worry as long as the accessory looks good or does the job it's supposed to do. But there's the problem; all too often they don't do that job, or do it poorly, even dangerously, since some accessories can cause problems to the car.

With the price of petrol and diesel constantly spiralling higher, more and more people are looking to alternatives for fuel, installing biofuel and gas converters on their cars. But what if those kits were fakes, not carefully made and using inferior materials - certainly not up to Western safety standards?

For safety, proper kits should employ multiple valves, but the fakes usually don't. That can cause the gas to leak out and start a fire - the gas cylinder could even explode, which would certainly mean death or injury for anyone in the car at the time.

That's not an isolated example. If you need to replace the cap for your petrol tank, for instance, you might just want one that fits and not give it any more thought that that. But proper caps have a special design with a safety valve that's meant to stop spillage and can also stop a fire in the event of an accident. The cheap fakes don't have those, making them potentially dangerous.

We rely on indicators to show other traffic where we're going. Bulbs do burn out, and signals fail. If your replacements are counterfeit, they could fail very quickly, or simply not work at all - and if they fail when you're driving, they could lead to an accident.

How To Avoid The Fakes

Avoiding fakes can be very difficult, since there are so many brands of auto accessories these days, especially for those customising their cars. But those cheap panels, lights and spoilers might not be worth the price.

The simplest advice is to avoid online auctions, which is where you'll find a lot of fakes being sold. But also be wary in general of the online purchasing world. A lot of those sites offering discount prices are just retailers for the fakes. If the price seems too low, no matter where you're buying, then it's probably because the product isn't the real thing, no matter how well it's packaged.

Be careful, too, at car boot sales. You might find a lot on offer at some stalls, but how do you know it's real? The answer - you don't, although the price will doubtless be very favourable - and an indication that the products are probably not the real thing.

Really, the only way to be sure you're not buying a fake is to purchase items from reputable dealers. You'll pay more, but you'll be sure you're buying quality, and the items will come with a warranty, which is important. With items like gas kits or biofuel converters, they'll meet safety standards, which can mean the difference between life or death in the event of an accident or problem. Sometimes paying more is really worthwhile.